Edmonton's greatest recorded deepfreeze started on January 7th, 1969, and it lasted all the way to February 1st. By the end of it Edmonton Blatchford had recorded 26 straight days where the daytime high temperature did not break -21°C.

Note: this post is quite old, but it has been updated throughout with interactive dashboards.


It was such a big deal that the Edmonton Journal printed this certificate:
The temperatures in that certificate are all in Fahrenheit, and so -6F is equal to -21.1°C, and -39F is 39.4°C.

This dashboard has the High temperatures in Celsius, and it also shows the surrounding years for comparison: 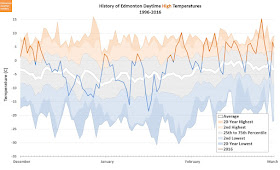 In the background of this chart we have "typical" temperatures for the last 20 years - the average, quartiles, and maximum & minimum temperatures since 1996. There's also a line for the daytime high temperatures from the winter of 2015-2016, with highs that were above freezing in orange, and highs below freezing in blue. 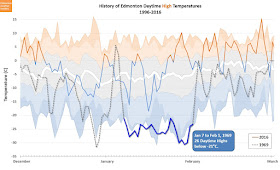 Here 1969 is shown as the dashed, grey line, and its historic coldsnap is highlighted in dark blue.

Right before the 1969 coldsnap started the temperature had been very warm at just above 5°C, so they probably had no idea what they were in for. And once it was all over, after almost a month below -20°C the temperature jumped straight up to 0°C, which must have felt amazing.

Here's another look at that winter. The "official" deepfreeze ran from January 7th to February 1st, but things actually got cold on December 23, had a brief warmup on January 4th and 5th, and then dropped into the real deepfreeze.

Was the 1969 coldsnap truly unusual, or has a bit of "walking uphills both ways" crept into this story? 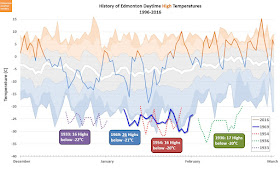 This dashboard shows all of the 15+ day coldsnaps with below -20°C, to see how January 1969 compared: 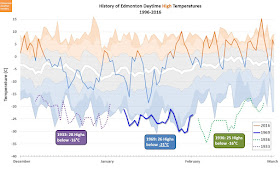 So January 1969 really was pretty unique in Edmonton's history.

It's worth mentioning that this deepfreeze wasn't limited to Edmonton: 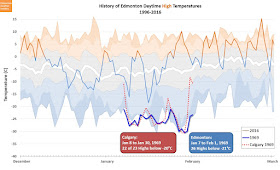 Here we have Calgary's high temperatures during Edmonton's coldsnap.

Calgary had a deepfreeze too, but it started one day later, ended two days earlier, and in the middle it popped up to -16°C for one day. It's not quite as headline-ready as "26 days below -6F!" but Calgary still had 22-of-23 days below -4F. 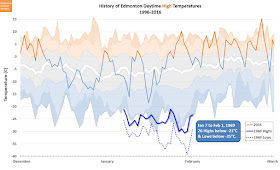 Today we've just looked at daytime highs, but to finish things off I've added the daytime lows for the January 1969 deepfreeze.

Here are the Lows in dashboard form:

For a bit more trivia, here are a few of Edmonton's other low temperature streaks:

Here is one more look at the winter of 1969, showing the Highs & Lows for December through March.

And for some context, here are the deepfreezes from the last few years:

For Lows below -25°C the most that we had in these winters was 17 days, and the longest stretch was 5 days.
Share