The writers of The Simpsons probably didn't have Alberta in mind when they joked about lousy Smarch weather. But sometimes March marks the end of our winter, while other times - like this year - it's not feeling very spring-like. 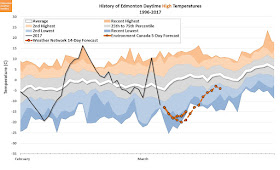 Environment Canada has our High temperature dropping down to -17°C and -18°C for a few days, and the Weather Network is predicting two cold weeks including a few Highs at -19°C and -20°C. That would put us 15~20°C below average, and colder than anything that we've seen since the beginning of February.

The experts are expecting something similar for the Lows: 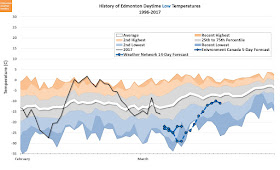 Environment Canada's forecast has Wednesday down at -25°C, and the Weather Network is even more pessimistic, with a few nights down at -29°C. And again, that means this week could be colder than anything we've seen in a month.

Looking at both the Highs and the Lows, if the forecasts end up being correct then we're right at the bottom of our typical temperature range, and might break one or two recent records.

That ties into something we'd talked about late last year in 'Tis the season of -20°C. In the past two decades cold days have been more common in early-March than in late-February: 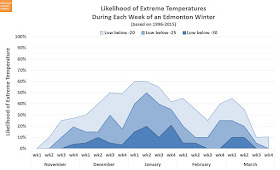 The Family Day weekend really lures us into a false sense of spring, but as I mentioned last week in the February Review / March Preview, 9-of-the-last-19 Marches have had at least one low below -20°C, and 17 have had lows below -15°C. 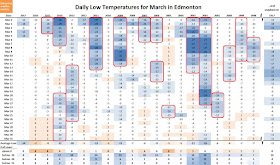 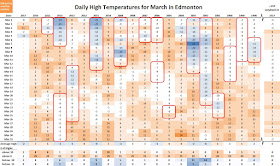 Here we have March temperatures going back to 1996. The coldsnaps with Lows below about -18°C are highlighted in red, along with the corresponding High temperatures during the day.

So yes, March coldsnaps are pretty common. Sometimes they last a few days, but other times they can last for weeks. 2002 is probably the most notable, with pretty consistently cold temperatures from the start of the month to about the 21st.


These are the coldest Marches out of the past few years, and their coldsnaps only lasted a week or two. And by the time we hit April we usually (usually) get almost a whole month of Highs above freezing. So hopefully Smarch 2017 will be short, and we'll be back on the path to spring again soon.
Share